January 7, 2011 - There are problems in trying to translate the stream of zeros and ones that former RAF Bentwaters/Woodbridge Staff Sergeant James Penniston wrote down in his notebook after the traumatic encounter with lights and craft of unknown origin on December 26, 1980.

First, are the stream of numbers translatable in 7-bit ASCII (pre-1986) or 8-bit ASCII (post- 1986)? Willing to take on the task were two retired scientists:

- Horace R. Drew, Ph.D. from Caltech in 1981, and now Australia, and well-known for producing the first high-resolution x-ray structure of DNA, for discovering certain aspects of the genetic code used to curve DNA in chromosomes, and for serious studies of geometries and other embedded mathematical “language” in crop formations under the pseudonym “Red Collie.” 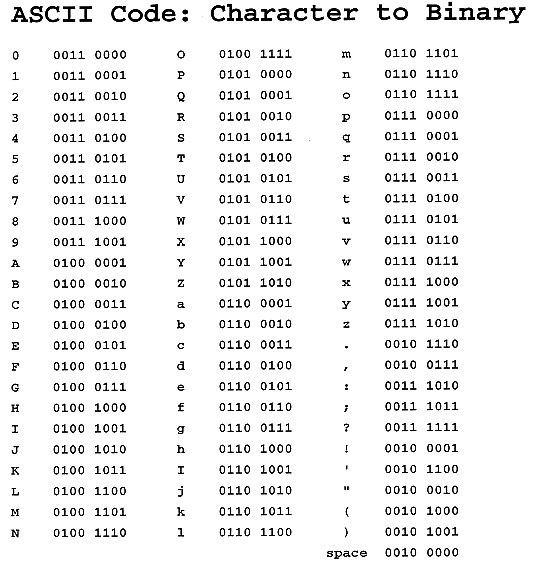 The American Standard Code for Information Interchange (ASCII), is a character-encoding scheme based on the ordering of the English 26-letter alphabet. ASCII codes represent text in computers, communications equipment, and other devices that use text. Most modern character-encoding schemes are based on ASCII, though they support many more characters than did the 7-bit ASCII typically used in 1980.

Historically, ASCII developed from telegraphic codes. Its first commercial use was as a seven-bit teleprinter code promoted by Bell data services. Work on ASCII formally began on October 6, 1960, with the first meeting of the American Standards Association's X3.2 subcommittee. The first edition of the standard was published during 1963. Then a major revision followed in 1967. The most recent update was an expansion from 7-bit to 8-bit in 1986.

ASCII includes definitions for 128 characters: 33 are non-printing control characters (now mostly obsolete) that affect how text and space is processed; 94 are printable characters and the space is considered an invisible graphic. Today the most commonly used character encoding on the World Wide Web is UTF-8.

At the time that lights, beams and craft of unknown origin interacted with the RAF Bentwaters/Woodbridge AFB near Woodbridge, England in December 1980, standard ASCII was 7-bit. Later in 1986, ASCII expanded to 8-bit. There was a revision to ASCII code in 1986, to allow for the extension from 7 bits to 8 bits, now UTF-8, a universal code, that includes many characters for work in other languages such as Swedish and German.

So the issue of taking any binary stream and decoding it, assuming you are going to stick with something like ASCII and see if it produces normal letters and numbers is: Do you try 7-bits or 8-bits?

Michael A. Reed, Ph.D., Astronomy, University of Arizona, and former astronomical instrumentation specialist, University of Arizona, now retired in Timberlake, North Carolina: “In the first binary stream of the Jim Penniston scanned pages of zeros and ones, Dr. Drew assumed to try 8-bits first from the start and that worked as we got down through EXPLORATION OF HUMANITY. 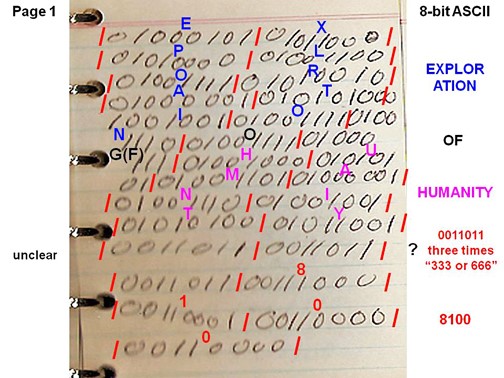 But also in 7-bit ASCII, 0011011 is an Escape Key character you find on a computer keyboard.

SO THE ESCAPE KEY IS REPEATED THREE TIMES AFTER ‘HUMANITY’?

COULD THE THREE ESCAPE KEYS MEAN A SPACE BEFORE THE LATITUDE AND LONGITUDE INFORMATION?

But Penniston’s zeros and ones definitely have 8-bit ASCII English alphabet letters at the beginning of the binary stream. Dr. Drew tried to make sense of it after the three identical 7-bit Escape Keys – the “break” – and decided he didn’t know what to do with the number 8100.

Otherwise, you could read this as 8100520942, all strung together. There is no indicator in the number stream from Penniston that 8100 is separate. But Dr. Drew and I figured that since 52 was the latitude of England, when 52 showed up right after the 8100, it might be part of a latitude and longitude.

WHAT HAPPENS IF YOU INCLUDE 8100 AS PART OF A LATITUDE AND LONGITUDE COORDINATE?

You’d be way up in the Arctic! 81 degrees North, you’re 9 degrees from the North Pole. But how to relate that to the rest of the numbers we’re now using as Latitude North and Longitude East or West? Dr. Drew decided to set the 8100 apart and try to translate the rest of the numbers in whatever latitude and longitude was there beginning with the 520942,since England is 52 degrees latitude.

The Latitude and Longitude Issue

After the 7-bit repeating code, we went back to 8-bit for the latitude and longitude information. Given the number of digits translated, if there had been any interspersing of 7-bits, the thing would be completely out of sync. A 7-bit there would produce garbage. So those are definitely 8-bit codes oddly mixed with 7-bit in the middle, but most of the message seems to decode as 8-bit until you get to the very end and the word: CONTINUOUS.

Then there is something that looks like “CEPR?” The code for the “C” is 8-bit. At the code for the “E,” Dr. Drew included 9-bits, perhaps by mistake, which would have thrown the next pattern out. When you’re doing it by hand, it’s very easy to get out of sync. It’s clear now that we need to do it on a computer that can show us every possible decode using 7-bit and then 8-bit. There could be layers of code that we haven’t discovered. 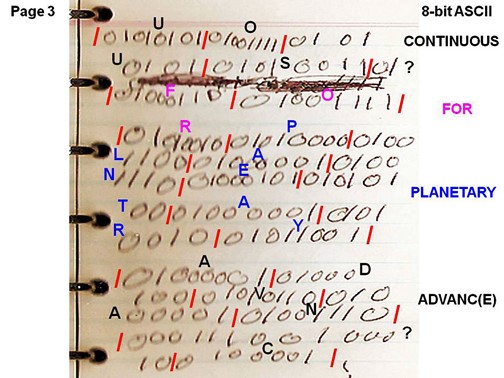 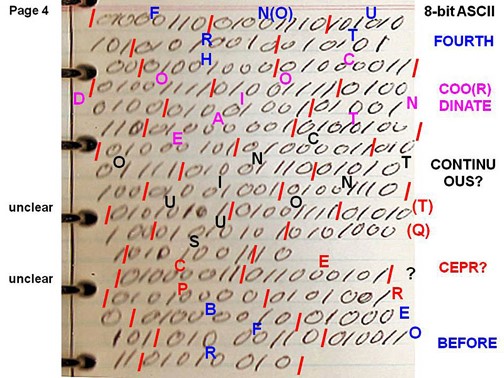 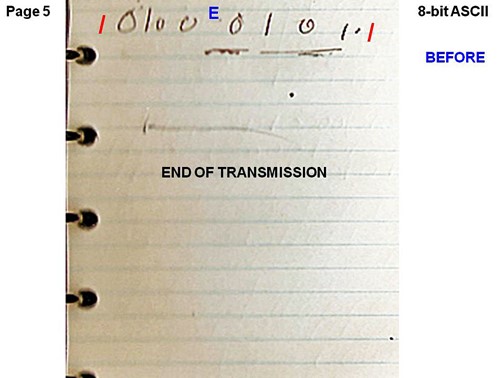 Where Should Decimal Point Be in Lat. and Long.?

CAN YOU DISCUSS THE OTHER BIG ISSUE THAT THERE IS NO CLARIFIER IN PENNISTON’S BINARY STREAM ABOUT WHERE THE DECIMAL POINT SHOULD GO WHEN YOU GET TO THE STRINGS OF NUMBERS THAT ARE INTERPRETED AS LATITUDE AND LONGITUDE?

Right. In the bits we are interpreting as latitude, there is first a total of 9 digits [ 520942532] and then the letter N. Then in the longitude, there is a total of 8 digits and possibly the letter W. But there is some question about the letter W because one of the bits has a 0 with a 1 in it. So, we really don’t know which it is. If it's a 0, it translates as W, a longitude. If it’s a 1, that is an underscore character ( _ ) without any meaning to us.

However, there is no specification for a decimal point for longitude or latitude. So there are three options in latitude:

[ Editor's Note: The ASCII binary code for a period is: 0101110. So there could have been this code in the Penniston binary stream that would have indicated where to place the decimal point. Wherever it was placed, it would be a definite decimal point in the latitude and longitude number sequence. But there was no such code there, so we have to consider all 24 possible latitude and longitude locations. ] 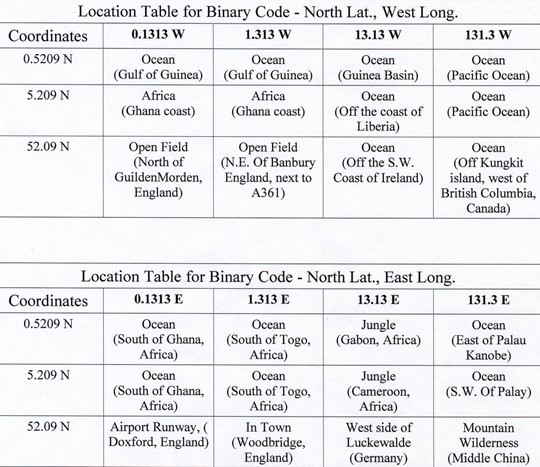 of the decimal point. Top, extending left to right, are the possible West Longitudes.

Those latitude and longitude combinations produce 12 possible options. Then the same

latitudes    North are placed with the left to right East Longitude possibilities.Those latitude

for a total of 24 latitude and longitude options.

If you go to Google Earth and drop in each of the possible 24 coordinates, some are in the ocean off the Gulf of Guinea or the Ghana coast. For the ones with the latitude at 52.09 N on the West Longitudes,

• if you go to .1313 W, that’s an open field north of Guilden Morden, England, which is not even a town – more like a few buildings southeast of Cambridge.

• At 13.13 W, you’re in the ocean off the southwest coast of Ireland, with no apparent undersea features on Google – it’s just kind of sea bottom there.

• At 131.3 W, it’s in the ocean right off the edge of Kungkit Island west of British Columbia, Canada.

Then if you go East and do the same thing, the southerly locations are either in the ocean or the jungle in Africa somewhere, except if the decimal point is placed at 52.09 N latitude.

• At 52.09 N latitude and 0.1313 E longitude, you end up at an airport runway in Doxford, England, southeast of Edinburgh on the coast.

• Then at 1.313 East, you’re in the town of Woodbridge, Suffolk, England, and that’s the one that Dr. Drew – when he was trying both east and west longitude directions- thought it was significant because it came out right in the middle of the Woodbridge town near RAF Woodbridge and Rendlesham Forest.

• If you go further to 13.13 East, you’re on the west side of the little town of Luckewalde, Germany.

• Then if you go to 131.3 East, you’re out in a mountain wilderness area in the middle of China.

So of all the 24 possible latitude and longitude sites, the one that stands out is the town of Woodbridge in the east direction. In the west direction, you are either in the ocean or in an open field. Because there is that one zero that has a 1 drawn in the zero, it means we have to look at the East longitude, too, and that is the one that includes Woodbridge, England. After we checked all of the 24 options, Dr. Drew decided the Woodbridge site seemed to have the most relevance to the RAF Bentwaters mystery with Jim Penniston and John Burroughs.

WHY WOULD ANY INTELLIGENCE TRANSMIT LATITUDE AND LONGITUDE COORDINATES WITHOUT SPECIFYING A DECIMAL POINT?

Yes, it seems like a glaring oversight if you are trying to transmit coordinates that a human can understand.

IN YOUR LOCATION TABLE FOR BINARY CODE, ARE YOU ALSO ASSUMING DEGREES, MINUTES AND SECONDS? Yes, Dr. Drew and I took it as decimal-based. Whoever wrote the binary code, or put it in Jim Penniston’s mind, understood the basics of ASCII, and certainly most of the message seems to be 8-bit. But we haven’t translated the whole thing in 7-bit and we haven’t moved an 8-bit filter and a 7-bit filter through each potential start point to see if the message changes. If you move what we have now over 1 bit, all the letters and numbers go away and you might end up with nothing but control characters or some other letter and number combination.

After those runs, we need to move over one bit and do it all over again in 8-bits and 7-bits. Then move over one more bit and keep repeating the analysis process – putting the extra numbers from the front at the end – and keep moving through Penniston’s binary stream number-by-number with an 8-bit filter and a 7-bit filter to see how each translates.

With the combination of those translations, we might be able to put together a more coherent message.