Eyes are also an interesting item. Birds take them out quickly and cleanly. When birds take out the eyeballs, however, they leave the lids. Mutilators not only take the lids, they almost invariably take a perfectly round patch of skin from around the eye also. Furthermore, eyeballs are socketed in a succulent pad of fat. The predator that takes an eyeball is even more interested in that pad of fat. But in mutilations, that fatty pad is not taken. (The Denver Post, September 29, 1975, quoting Dr. A. E. McChesney, a veterinarian and pathologist in the Colorado State University lab where post mortems were done on mutilated animals.) 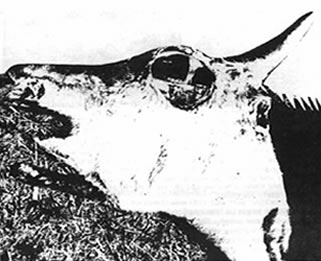 How can anyone tell the difference between predator damage and the surgically precise work of the phantom mutilators? Stockmen and sheriffs think they can immediately see the differences between that fantastically precise workmanship and the chewing, ripping and tearing predator damage that most of them have seen dozens or maybe even hundreds of times before. During the summer (of 1975) while the Colorado Bureau of Investigation (CBI) was still very naive and honestly perplexed about what was going on here, the "experts" were saying that, too. The best way to tell predator damage from a man-made mutilation is by simple visual observation.

But after they had gotten together with the authorities in other states that had gone through the same experience a year or so earlier, and had a better idea what the score was, the story began to change. They became a lot less naive and began saying the only way to tell the difference was by a close microscopic examination. (The Rocky Mountain News, Denver, Colorado, August 10, 1975, and The Billings Gazette, September 12, 1975.)

For one thing, not many farmers or ranchers have expensive microscopes and are expert at using them. The final verdict in these important matters must be removed as far as possible from the plain speaking amateur and placed in the realm of the professionals, who always know which side their bread is buttered on, and who butters it for them.

In order to get a better control of the situation, the CBI began using its own laboratory to examine "hide and tissue samples from 36 reported mutilated animals and found only two cases in which cuts had been made with sharp instruments," Whiteside said. "The damage in the other cases was done by predators," the lab men say. (The Grand Junction Sentinel, December 14, 1975.)

By doing a little lab work of their own, they were able to undercut and dispute the findings of the Colorado State University Large Animal Pathology Lab at Ft. Collins, where the pathologists doing the actual carcass examinations are undoubtedly competent, conscientious and honest men.

The reader might be interested to know the inside story of one of those 36 hide and tissue samples the CBI allegedly examined. One sheriff and his deputies were sure they were being told bedtime tales by the CBI. So, they decided to find out. They submitted a sample of hide and tissue they themselves had very carefully cut from a carcass. The report came back that a fox had done it. Not only had the teeth marks showed up under the microscope, but also a distal hair from a fox had been found on the specimen. The amazing thing to the sheriff's department, and to that entire community, was that no one had seen a fox there for twenty years.

After having said all this, it must also in all honesty be said that the CBI and the official investigating bodies of several other states that have looked into the cattle mutilation phenomenon are probably right and the ranchers and sheriffs are probably wrong in their determination that "sharp instruments" have or have not been used on mutilated carcasses. It is very doubtful that scalpels or any kind of sharp bladed instruments were used. In fact, we can almost be certain they were not used.

There's a story in scripture, Acts, 12:6-10, that throws a little light on this. We are told that St. Peter had been thrown into prison, and a lot of good people were praying for his release. Then we are told that during the night as Peter was sleeping between two soldiers, chained to each of them, a man came and woke him up. "Come quickly," he said, "get dressed and put on your shoes." And we read that: "The chains fell from his hands." Then the man led him outside and left.

The point for us to consider is how the chains were made to fall from his hands. Did the man say, "Hocus pocus ali kazam?" Of course, many people will say that really did not happen and that cattle mutilations did not really happen, either. Behind every "miracle" is a technique. Did the man use a knife or a scalpel to cut off those iron manacles? He surely had some other technique, probably a small instrument no larger than a knife to slice through those irons so easily.

So, when the CBI and other authoritative bodies say their microscopic examination of the cuts make them appear to be teeth marks rather than blade marks, we can believe they are telling the truth. The instrument that made them probably cut by means of vibrations and might leave edges that appear serrated under a microscope. We can't really believe the mutilators use scalpels or knives of any kind. Even in the most skillful hands, knives and scalpels could not do what many have seen done in those cases. It had to be "something better than anything we've got on this earth; something we don't know about." (Capitol Times, Madison, Wisconsin, March 12, 1975.)

CBI headquarters is a plain white unpretentious building in south Denver. The receptionist asked my name and business. I answered, "I research cattle mutilations." She disappeared into an inner office. In a few minutes a tall, impeccably groomed man came out and beckoned me into his inner sanctum, a bright comfortably carpeted place where he sat down behind his perfectly clean desk and I in front. He crossed his legs easily and fondled his pipe with a far away thoughtful look in his eyes. He could have been a CIA agent unobtrusively attached to some foreign embassy, a graduate from Harvard or Yale with his name in the social register.

We talked briefly of predators and he reminded me that commissions in other states had come to the same conclusion they had, that mutilations were almost all predator-caused. I told him I was especially interested in the buffalo deaths at the Cheyenne Mountain Zoo. He was without doubt a well-trained sleuth, sizing me up word by word. A coyote was seen feeding on one of the carcasses, he said, which I had already heard.

Then we discussed helicopter sightings and their alleged harassment of ranch families. He was fully aware of the Ft. Carson soldiers who touched down and found themselves facing a row of drawn guns, and supplied details I had not known. Everything I brought up he knew about. He was not dumb, far from it. The helicopter sightings all had a simple explanation in his view. Men training at Ft. Carson have to put in so many flying hours. So, they were in the skies a lot. Soldiers have chased girls from time immemorial, on foot, horseback, helicopter or by any other means available. "If I asked the commanding officer, he would not say that," I said. "Of course not," he replied. "He would not say that if I asked him, either." There was a lot of truth to what he said about helicopters that had not occurred to me before.

I had not expected to learn much there, but it would have been foolish to avoid CBI. The important thing was to get the feel of the place. Also, I'd read they had a map pinpointing all the reported mutilations. That's the one thing they had that I really wanted to see. I asked, but there seemed a little reluctance about showing it. "Is it secret?" "No," he replied, "it's just that it's in an office that's busy now." I told him I was willing to wait.

It was only a minute or so till we were standing before a map of Colorado on the wall behind the chief's desk. It was about the size of a common road map and stuck with various colored pins. I could see at a glance that it was not the sort of thing that interested me. A political map in every sense of the term, a different colored pin for the several counties. What I had hoped to see was the pattern the mutilations had been following.

Next, I looked for those mutilations that had occurred in the most interesting places, the ones at NORAD, Cheyenne Mountain Zoo and in the nearby town of Fountain, also the two mutilated cows that had been left at the Rocky Flats' gate, the only reported cases in all of Jefferson County. They were not even marked. But the disappointment and disgust on my face must have been observed by my companion.

"They are marked by counties," he said, looking as closely at me as I was looking at their map. That only took a minute. I thanked him for his time and courtesy. "I think cattle mutilations are a lot more interesting than you'd like to let on," I told him. "Maybe so," he said, shrugging his shoulders as though it was a free country for anyone to think whatever he cared to. But it was all a put-on that I did not buy for a second. Without doubt, every room there was bugged.