This file is used with permission

“Security Control, the object is about 150 feet in front of us.” 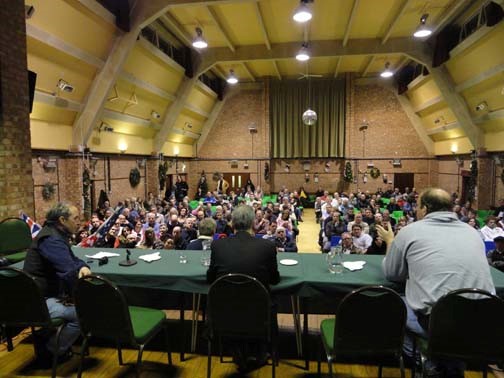 On the evening of Tuesday, December 28, 2010, there was a gathering of some 400 people in the Woodbridge Community Hall on the 30th anniversary of aerial lights, beams and craft of unknown origin reported after midnight on three consecutive early mornings of December 26, 27 and 28, 1980, at the then joint U. K. and American RAF Bentwaters/Woodbridge air base. This 30th anniversary event was organized by Suffolk County resident Gordon Goodger to raise money for the U. K. TreeHouse national charity for autistic children and their families. Speakers included Nick Pope, who once was in charge of the U. K. Ministry of Defence UFO desk; Earthfiles Reporter and Editor Linda Moulton Howe; and Left At East Gate co-author Peter Robbins. 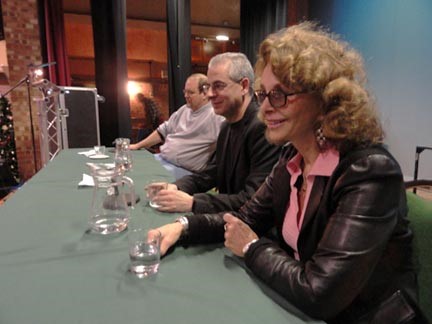 Image for Linda by Peter Robbins.

The main speakers returning to Woodbridge and Rendlesham Forest for the first time together since December 26, 1980, were former USAF Airman 1st Class John Burroughs and former USAF Staff Sergeant James Penniston. An American television crew followed them for a possible 2011 TV special about the RAF Bentwaters mystery. 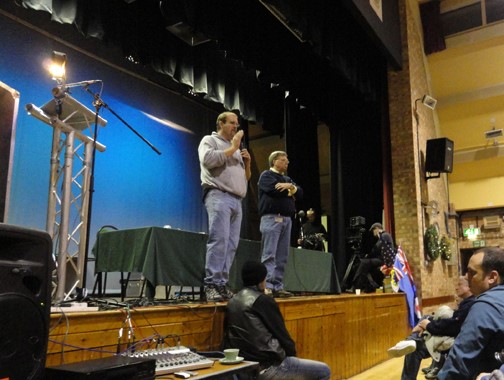 Thirty years ago on December 26, 1980, around 3 AM, USAF Airman 1st Class John Burroughs, USAF Staff Sergeant James Penniston and USAF Airman Ed Cabansag were in Rendlesham Forest under orders to investigate highly strange and colorful aerial lights. According to signed and dated statements at the time, John Burroughs and Jim Penniston came close to the lights and a triangular craft on the forest floor that Jim Penniston describes approaching and touching its black, glassy surface. As his fingers went over raised symbols “like Braille” in a 3.5 foot long section of the craft, S/Sgt. Penniston's mind was telepathically flooded with binary code and some information about the intelligence behind the craft and lights.

Airman John Burroughs did not remember the craft or S/Sgt Penniston touching symbols. Burroughs has never been able to fully recall what happened to him that night, but the rumors have long been that he “jumped up on” a craft in the forest or was taken up in a beam of light.

At the time, USAF Airman 1st Class Richard Bertolino remembers being on Bunker Hill at RAF Bentwaters that night listening to S/Sgt. Penniston in their radio channels describe the “woods are all lit up” and Airman Bertolino could see a large, football field-sized dome of light in Rendlesham Forest.

Richard Bertolino, 091509 Earthfiles: “I hear him (Sgt. Penniston) and he was taking control and he was doing all the transmissions to Central Security Control (CSC). As they were going into the woods, I’ll never forget the one transmission that first made my hair stand up and it still does to this day. You could hear a little heavy breathing as he was walking through the woods. Penniston says, ‘Security Control, the object is about 150 feet in front of us.’ And then it was just a matter of a couple of seconds and he (Penniston) comes back on the radio and his breathing is a little heavier and he asks, ‘Security, do you copy that the object is behind us now?’ And that’s one I’ll never forget!

We relayed some of the transmissions from Bunker Hill until Penniston left Cabansag behind to do a (radio relay). We had a great triangulation being on the hill to them in the Rendlesham woods to the object and to Security Control. ... They still had their same radios, but we could no longer pick up transmissions after we had been out there for about 45 minutes to an hour.” 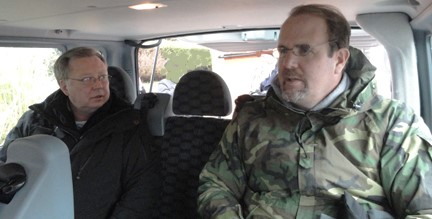 Jim Penniston and John Burroughs heading out for the East Gate

and Rendlesham Forest the morning of December 25, 2010, Woodbridge,

On Christmas morning, December 25, 2010, I joined John and Jim returning to Rendlesham Forest for the first time together since 1980. We drove from the East Gate down the same road they traveled thirty years ago. The question for both of them was exactly where did they have their closest encounter with the lights and why don't they remember the same details?

Over the three decades since the Rendlesham Forest phenomena, various maps and sites have circulated, including the one below produced from statements by Jim Penniston about where he and John Burroughs and Ed Cabansag had the dramatic December 26, 1980, encounter at 3 AM. This map shows the orange-colored route from the East Gate to a right turn on a logging road and then a left onto a road through the forest toward an open farm field where an orange circle marks the alleged site of the encounter. 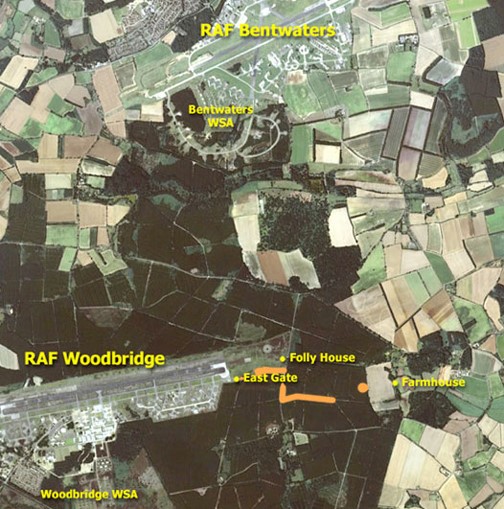 field. During the December 2010 return to Rendlesham Forest for the first time since

December 26, 1980, John Burroughs felt that the orange dot in the above map was not

correct, but should be further south near the finger of trees that juts westerly

into the field. Map by John Rackham, U. K.

After walking through the forest at day and night on December 25-26, 2010, John Burroughs did not feel that the site at the center edge of the farmer's field now marked by a picnic table and UFO signs was correct. He remembered that he and Jim Penniston could only see the Orford lighthouse light after they moved across a short field and past a farmhouse. At the currently marked site by the picnic table and signs, there is a farm house straight across the open field. Then there is a second farm house to the right of that one and a third farmhouse at the eastern end of a treeline that extends into a large field. We drove by the third farmhouse that does have animals. In his memory and December 1980 statement, John Burroughs described hearing a noise “like a woman was screaming.” Jim Penniston remembers farm yard animal sounds and deer running straight towards him when he and John were walking in Rendlesham Forest following the aerial lights towards the open field.

farm house at eastern end of open field. Half way between the yellow and orange lines on

rotates. The center white line is the third farm house behind the treeline that juts westerly out

into the field. The blue circle indicates water in the marshy line of trees. The red circle 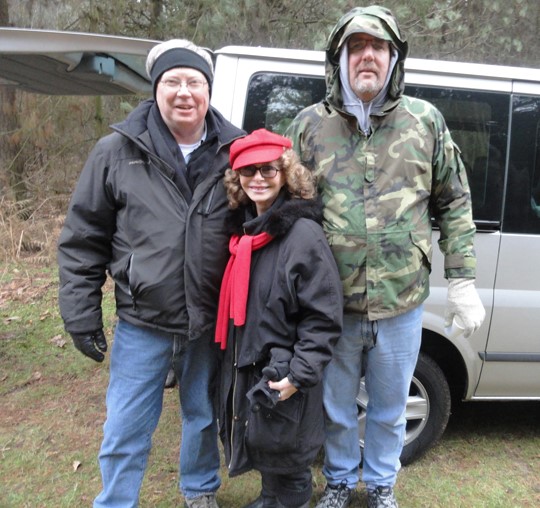 not far from the East Gate of the historic RAF Bentwaters/Woodbridge AFB.

John studied his original hand-written statement written soon after the December 26, 1980, Rendlesham Forest incident and decided that we should go back to the logging road and the left turn toward the farm field and keep going straight to the field as far as we could. 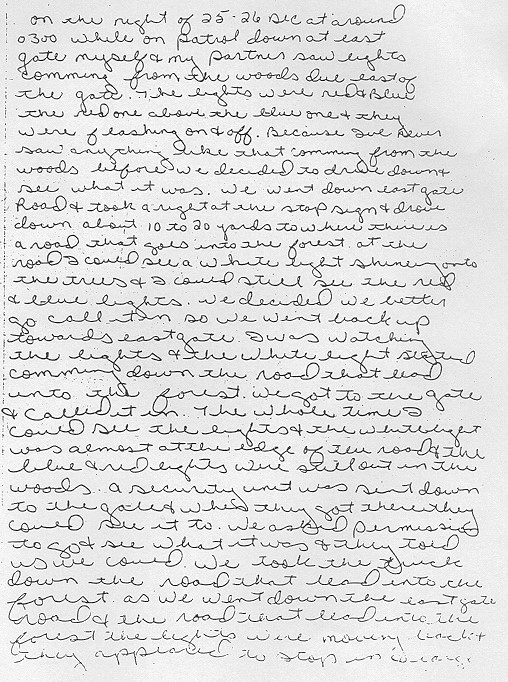 First page of hand-written statement by John Burroughs after the December 26, 1980, 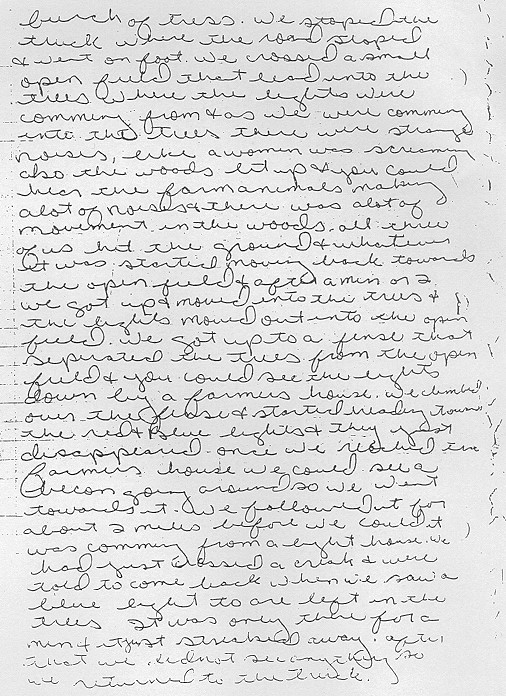 Second page of hand-written statement by John Burroughs after the December 26, 1980, 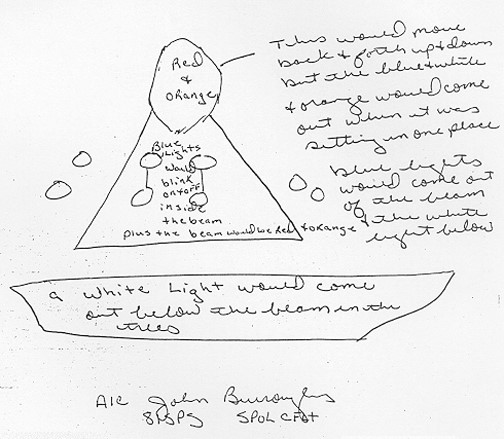 Third page of hand-written statement by John Burroughs after the December, 26, 1980. 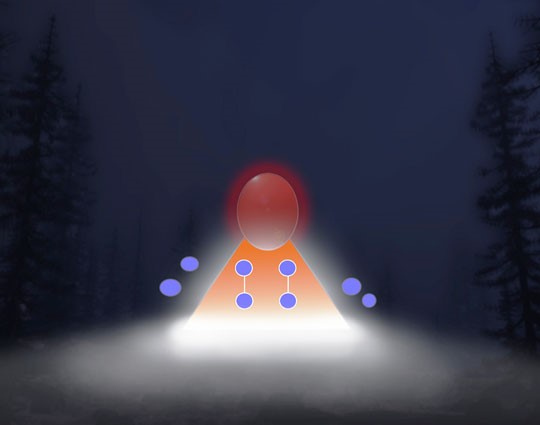 Low On Horizon Between Farm House 1 and 2

The first night we were there, we could see the faint, tiny point of light from the lighthouse beacon pulse once every six seconds low on the eastern horizon opposite the picnic table site. 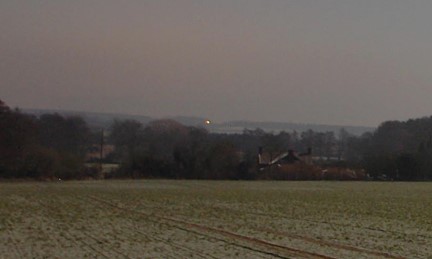 between first and second houses on the eastern side of the open field. Third

field is right of second house out of frame. Time lapse image © 2010 by Winston Keech.

So, John became increasingly certain that he and Jim Penniston must have been further to the south where the row of trees growing in a watery marsh juts out into the open field. 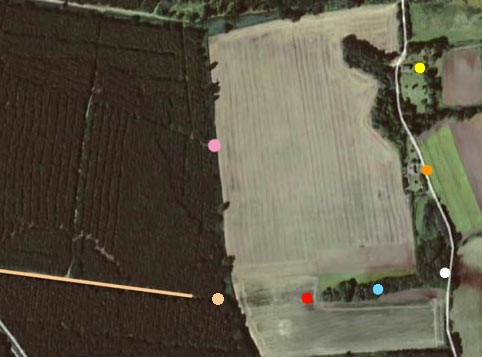 after midnight during our TV production research on December 26 and 27, 2010,

reported getting wet during their December 26, 1980, 3 AM, encounter with the lights

UFO signs (pink circle). But John and Jim say that pink circle is not the correct

location of their encounter; the pale orange circle is the phenomenon site.

John and Jim walked together after midnight on December 26, 2010, around the finger of trees that juts westerly out into the field from the third farmhouse in image above. At the red circle area, the TriField meter. provided by U. K. engineer Winston Keech during our three nights exploring along the edges of the open field. pegged as high as it would go with a loud noise.

marsh. Both times, John Burroughs was near the meter.

[ Editor's Note: The TriField Natural EM Meter was designed to do field measurements for special research. It detects changes in extremely weak static (DC or natural) electric and magnetic fields, and signals with both a tone and the movement of a needle-type gauge if either the electric or magnetic field changes from previous levels. The meter is sensitive to magnetic changes of as little as 0.5% of the strength of the Earth's magnetic field, and the tone will sound whether the field increases or decreases. A radio and microwave detector is also included, which reads radio power directly. Because man-made AC electric and magnetic fields are very common and could interfere with readings of static fields, the meter has been designed to ignore AC fields. Normal construction materials don't block magnetic fields, so the meter can be placed indoors. It has a built-in tone, so can be used in the dark and will sound the tone at whatever level of field the user sets to detect. Also see AlphaLab Inc. ]

The next night after midnight on December 27, 2010, I went with John and Winston Keech back to a place near the finger of trees for a night watch with Winston's IR (infrared) cameras and his TriField meter. I videotaped the men in infrared while John and Winston walked to the area at the west end of the finger of trees to see if the meter would peg again at the highest level. It did and John thought he saw one or two pale blue lights move in the trees around the same time.

On December 28, while John, Jim and I were at the Woodbridge Community Hall to speak, Winston Keech returned in his van with IR cameras and the TriField meter for another night watch near the finger of trees. This time without John Burroughs, Winston took his meter out to the same spot marked by the red circle where the meter had pegged highest both December 26 and 27 after midnight. But the needle remained calm with little movement. Winston wonders if John's presence is the key to the meter's previous strong readings?